Book Review – “The Boy Who Glowed in the Dark (Nadia Tesla, #3)” by Orest Stelmach

book review, Chernobyl, Nadia Tesla, reading, The Boy Who Glowed In The Dark

Book: The Boy Who Glowed in the Dark (Nadia Tesla, #3) 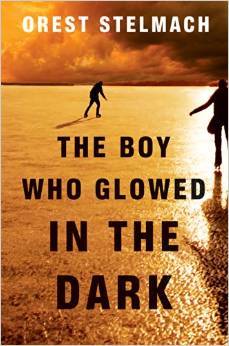 ““The fate of the world depends on us.”

With one mysterious e-mail, Bobby Kungenook—the teenage hockey phenom living undercover and guarding part of a revolutionary scientific breakthrough—realizes someone else shares his secret. The sender summons Bobby from New York to a rendezvous in radioactive Japan. There, with the help of Bobby’s guardian, Nadia Tesla, the two will forever alter mankind’s destiny.

But dangerous people from Bobby’s haunted past are hot on his heels, determined to possess what could be the power of life and death. And when the enigmatic e-mail sender, Genesis II, is kidnapped after a bloody showdown on the scarred streets of Fukushima, Bobby must tap into his remarkable abilities to pursue the brutal captors into the forbidding reaches of Siberia—and the land where his journey began.

As the Nadia Tesla series races to its stunning conclusion on the frozen shores of Lake Baikal, the boy from reactor four will claim his fate and become a legend.”

I started reading this series in 2013 when one of the non-profit organizations I follow on Facebook shared the link stating that the author was donating a portion of all sales of the book to the organization (insert shameless plug for Children’s Chernobyl International here)…the ebook download was only $4.99 on Amazon, so I figured I’d go ahead and pick it up. Er, down. Whatever the case may be.

This is the third book in the series (I guess I should get around to reviewing the others as well – my OCD nature would appreciate that) – the Nadia Tesla series, as it’s known. (I don’t think I knew that until the 2nd book came out…but it’s not important, really.) You really need to read the first two books in order to get the background on the story line – picking this one up right out of the gates isn’t out of the question, but it would make more sense to the reader to know the whole story before embarking on this leg of the journey.

As the book description indicates, the setting takes us to Japan where the Fukushima nuclear power plant has riddled the region uninhabitable due to radioactive contamination from the devastating earthquake and tsunami in 2011. We see many similarities between the towns impacted – mainly the residents who still live in the areas, despite the high levels of radiation and lack of supplies and medical attention.

Bobby receives a mysterious email from someone known as Genesis II. Nadia and Bobby are off on their journey to Japan without really knowing what’s in store – somewhat predictable in their adventures, but I still find the action entertaining and enjoy piecing the puzzle together. Who is Genesis II? Aside from the obvious similarities, why the connection to Fukushima? Could there be another person out there who knows Bobby’s secret? And who is this mysterious man hot on the heels of Nadia and Bobby?

I can’t really go into too much more detail about the plot without giving away too much info – spoilers abound! You’ll just have to read the series…I definitely recommend it if you’re into mysteries or crime drama – it’s well represented with more Russian organized crime references. There is action and adventure, and the ending is definitely a surprise.

Speaking of the ending, I have to say I wasn’t expecting it, and was hoping for something a little more satisfying. Will this really be the last of the series?! I want to learn more about what’s under that frozen lake!! I am looking forward to the prequel that’s coming out next month, just to continue the series a bit longer. Amazon has a publish date of 5/1/15 – eek, that’s in a few days!

Overall, I give this book a 4 Martini Rating – I enjoyed how they worked Fukushima into the plot, and thought it was a clever way to acquaint us with some new characters (and better acquaint us with characters we learned about in previous books). Really I’d give it a 3.5 rating, but since I really enjoyed the series as a whole, and I LOVE that the author has been donating proceeds of the royalties to one of my favorite organizations, I’m rounding it up to a 4 Martini rating 🙂