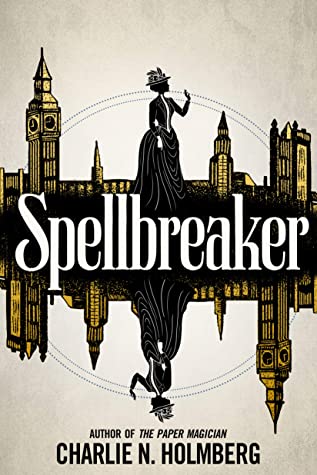 “The orphaned Elsie Camden learned as a girl that there were two kinds of wizards in the world: those who pay for the power to cast spells and those, like her, born with the ability to break them. But as an unlicensed magic user, her gift is a crime. Commissioned by an underground group known as the Cowls, Elsie uses her spellbreaking to push back against the aristocrats and help the common man. She always did love the tale of Robin Hood.

Elite magic user Bacchus Kelsey is one elusive spell away from his mastership when he catches Elsie breaking an enchantment. To protect her secret, Elsie strikes a bargain. She’ll help Bacchus fix unruly spells around his estate if he doesn’t turn her in. Working together, Elsie’s trust in—and fondness for—the handsome stranger grows. So does her trepidation about the rise in the murders of wizards and the theft of the spellbooks their bodies leave behind.

For a rogue spellbreaker like Elsie, there’s so much to learn about her powers, her family, the intriguing Bacchus, and the untold dangers shadowing every step of a journey she’s destined to complete. But will she uncover the mystery before it’s too late to save everything she loves?”

I really enjoyed this book. I’ve had my eye on it for a while and when it was offered as a Prime freebie, I decided to pick it up. A fun, easy read with likable characters and a plot that moved along at a decent pace; it did not disappoint.

The storyline was interesting and unique – I enjoyed a fresh take on magical abilities that wasn’t too unbelievable. The setting in Victorian England added to the charm, and even magic didn’t seem out of the realm of possibility. There is light romance, but not overbearing. It is a plot device, so you can’t really avoid it.

I liked all the characters, which is rare – even the baddies are relatable. Elsie seems like a reliable friend and someone you’d want at your side for whatever adventure comes your way. Bacchus was delightful and I liked getting to know him through this story. I think he’d have an interesting story on his own, given his background.

In addition to reading it, I also grabbed this on Audible (working from home means LOTS of audiobooks!).  I am VERY particular about narration, and I hate getting bamboozled even after listening to a sample of the audio. The actor reading from Elsie’s point of view was brilliant – good tone and inflection, read at a good pace, etc. The actor reading Bacchus’s point of view, however, was less than enjoyable. Over-acting, poor accents (tried too hard), and pronunciations were not consistent with the female actor/or even through his own narration. When he was reading the female dialog, it was forced and tried too hard to be too feminine. This may not bother some folks, but it made me cringe and skip a few sections since I was already familiar with the story.