Book Review – Midnight in Siberia: A Train Journey into the Heart of Russia

Book: Midnight in Siberia: A Train Journey into the Heart of Russia 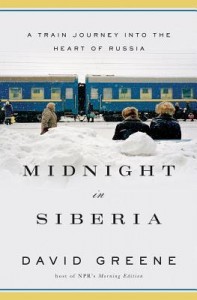 Far away from the trendy cafes, designer boutiques, and political protests and crackdowns in Moscow, the real Russia exists. Midnight in Siberia chronicles David Greene’s journey on the Trans-Siberian Railway, a 6,000-mile cross-country trip from Moscow to the Pacific port of Vladivostok. In quadruple-bunked cabins and stopover towns sprinkled across the country s snowy landscape, Greene speaks with ordinary Russians about how their lives have changed in the post-Soviet years.

These travels offer a glimpse of the new Russia a nation that boasts open elections and newfound prosperity but continues to endure oppression, corruption, a dwindling population, and stark inequality.

We follow Greene as he finds opportunity and hardship embodied in his fellow train travelers and in conversations with residents of towns throughout Siberia.

We meet Svetlana, an entrepreneur who runs a small hotel in Ishim, fighting through corrupt layers of bureaucracy every day. Greene spends a joyous evening with a group of babushkas who made international headlines as runners-up at the Eurovision singing competition. They sing Beatles covers, alongside their traditional songs, finding that music and companionship can heal wounds from the past. In Novosibirsk, Greene has tea with Alexei, who runs the carpet company his mother began after the Soviet collapse and has mixed feelings about a government in which his family has done quite well. And in Chelyabinsk, a hunt for space debris after a meteorite landing leads Greene to a young man orphaned as a teenager, forced into military service, and now figuring out if any of his dreams are possible.

Midnight in Siberia is a lively travel narrative filled with humor, adventure, and insight. It opens a window onto that country s complicated relationship with democracy and offers a rare look into the soul of twenty-first-century Russia.”

I must disclose the fact that I am a big fan of David Greene…or, more precisely, I’m a big fan of David Greene’s voice as he talks to me in the mornings on Morning Edition. I am a fan of his reporting style, and I enjoy the way he tells a story. I did in fact read the book, rather than listen to the audio version (that’s next on the agenda) because I didn’t want to be distracted 🙂 My husband and I purchased this book at an event hosted by our local NPR radio station (WBOI 89.1) in which we listened to Mr. Greene share stories and tales of how and why he reports in the manner he does, and we were able to have our book signed by “Big Sexy” (his words…not mine!).

Now that that’s out of the way…

I went into this book knowing nothing specific about Russia, aside from preconceived notions that their leadership is corrupt, the average citizen isn’t wealthy, and they are very passionate about hockey and supportive of their countrymen for the sheer fact that they are Russian…that is to say, Russian roots run deep.  I have always been interested in learning about other cultures, and for me there is a certain mystique surrounding Russia and other former soviet countries. In my mind – right, wrong, or otherwise – I have an image that time is frozen and people are still living in the shadow of the late 80’s – fashion, transportation, buildings in towns, etc.

I have a habit of reading other peoples’ reviews just to see what I’m getting myself into…and I was floored by the reviewers stating they were “annoyed” with Greene for feeling that American democracy is a perfect solution for all countries and people (which, I’m willing to wager that’s how 85% of the American population feels…if not more).  At one point, Greene recognizes that what’s good for the American goose is not necessarily good for the global gander – just because democracy works seemingly well for America, it is not a one-size-fits-all solution.  Honestly, though – who doesn’t feel this way from time to time? All many of us know is American democracy, and while parts are broken, many people have fought, bled, and died for us to have a democracy. Without getting too political and stirring the proverbial pot, I don’t think it’s healthy for people to take the position that America’s way is the only right way, and ALL countries who seem to struggle with their leadership need to follow in our footsteps. It’s ironic to me that Americans are so anxious about other people forcing things onto them (religion, politics, social issues…you name it!) yet we always try to force our way of governance onto the next country with unrest.  I also have to wonder if Greene’s background in political journalism has conditioned him in to a “rose colored glasses” mindset when trying to relate the American system to something many of us aren’t familiar with. Even though we have more rights and the ability to voice our displeasure with the government in America, I wonder how easy it is for someone in a public eye, employed by a reporting agency such as NPR, which prides itself on being unbiased…just a thought…

Another common complaint I noticed in the reviews was the reference to the restaurant that Greene’s wife was working to open….and for the life of me, I can’t even understand why this was an issue. Those moments aren’t as predominant as folks made it out to seem, and I can barely recall when the venture was mentioned in the book. If that’s your only complaint of the book, then I think you were missing the point…but that’s just my opinion.

Overall, I really enjoyed “Midnight in Siberia” and found it though-provoking and entertaining. Bonus for the section of pictures Greene included – it was nice to see if my mental picture of the singing Babushkas matched the real-life image 🙂 It is hard for me to choose a favorite section of the book – I thoroughly enjoyed the details about riding in the train cars, the etiquette in bringing someone flowers, and I loved the scenes set in the remote villages – the places that have the richest heritage and people who have survived things we can’t imagine. My hope was that it would dispel any misconceptions I had…and while I still feel a bit like the whole of Russia is a time warp and people are still pegging their jeans, I have reaffirmed my belief that Russia is a country of very proud and very strong people, filled with hope that one day things may change for the better…even though they aren’t quite sure what that entails.