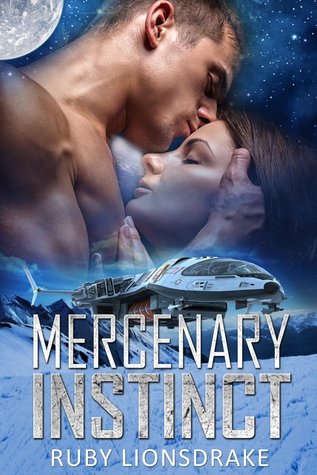 “Skulking around in the ruins on a planet swarming with treasure hunters, slavers, and bounty hunters isn’t good for one’s health. But Ankari Markovich needs a few archaeological samples for her latest business venture, a venture that might prove lucrative enough to move her family off the impoverished planet where she grew up. Unfortunately, she has no sooner collected her samples than she’s captured by a band of brawny mercenaries. The captain might be handsome, but he’s intent on turning her over to some finance lord who has, for reasons unknown, put a bounty on her head, a ridiculously large one at that. If she can’t figure out a way to escape before she’s delivered to the lord’s home world, she could be forced into a life of indentured servitude—or worse.

Captain Viktor Mandrake doesn’t usually take on piddling bounty hunting gigs, but when his intelligence officer informs him of a criminal on a nearby planet, he decides it wouldn’t hurt to take a shuttle down to collect the woman. But Ankari Markovich is trouble from the start, nearly eluding his elite forces, then fighting and tricking his people left and right. He finds himself admiring her spirit, but according to her warrant, she’s a criminal. The safest thing is to keep her in the brig and ignore her until she can be handed off to the man who wants her.

But the situation grows more complicated when other bounty hunters show up, wanting to claim Ankari for themselves. Thanks to this woman, Viktor’s ship is in danger, his crew members are going missing, and he’s fighting enemies he never asked for in a jungle in the middle of a hurricane. He’s either going to strangle Ankari… or fall in love. Either scenario could get him killed.

Mercenary Instinct is a full-length, stand-alone novel of 90,000 words. It is part of the “Mandrake Company” series of science fiction romance stories and is recommended for readers who enjoy space-based adventure (such as Firefly) and steamy love stories (in the style of Linnea Sinclair).”

Based on the lengthy ‘snippet’ above, you can pretty much discern where this tale will lead…as is the case with most books of this genre, I’ve learned. (That is my own very humble opinion, of course…YMMV!)

I came upon this book after hearing it was a pen name project of an author I really enjoy; naturally I had to check it out. It also helped that the Kindle edition was free on Amazon (at the time – not sure if that is still the case).

It is an easy read – nothing overly complicated to understand. The plot is straight forward, and the characters are likeable and you can kind of connect with them. But I didn’t LOVE them. I didn’t ponder their existence, nor did I pine for more information on their lives.

The environment in which these events unfold aren’t well explained. Don’t get me wrong – the scenes are described well enough for you to picture them, but I’d like to know more about the worlds (planets? I can’t recall…) and how things came to be. It seems very Earth-like, while still being otherworldly…if that is possible. (Am I boring you yet? I really need to work on my book reviewing skills.)

Let’s cut to the chase. The romance. You know it’s there – look at the cover, for Pete’s sake. It was predictable and happened pretty fast, if I’m honest. But, in liking the characters enough, you kind of want them to get together. It’s written tactfully – will your brow sweat? Maybe, depending on your mood. It’s definitely not skanky, or dirty – no Mr. Grey here, thankyouverymuch. It’s a reasonable amount of romantic interlude – and I’m OK with that.

As for the story line – it’s OK. I felt like I was plopped into a scene without a lot of understanding where I was at (besides in a cave with petrified alien poo), or the significance. When I did learn why, it was kind of information overload and my eyes glazed over. Maybe I just wanted to rush to the sultry bits? I dunno. Anywho…I felt the climax of the story (hehehe…get it…) was a little rushed – the point where they meet up with the main baddie and the events that unfold after just felt…rushed and forced.

I really feel bad about being so critical of the book – I love this author to pieces and she’s amazing, but I just wasn’t feeling this book. There are additional books in the series, and I don’t feel inclined to check them out. *sadface*