Book Review – “Confidence: The Diary of an Invisible Girl” by Paige Lavoie

Book: Confidence: The Diary of an Invisible Girl 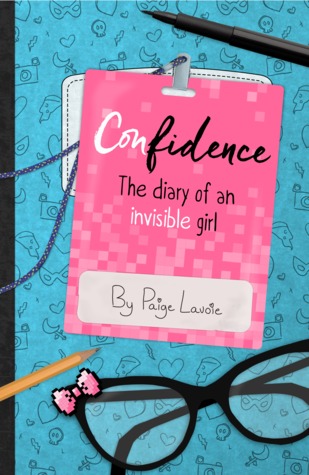 Confidence: The Diary of an Invisible Girl by Paige Lavoie

“Comic-book-obsessed Barbara Jenkins’ idea of an exciting night consists mostly of fan fiction and frozen pizza-that is, until one fated day during the start of the school year when she literally crashes into the queen of the AV Club. Barbara soon begins to explore life outside her comfort zone as she is thrust head first into a new world of costumes, conventions, and crushes, as well as a HUGE secret.”

Before I begin the official review, I’ll add my disclaimer that I received a PDF version of this book from the author before it was released.

OK – now that that’s out of the way… YOU GUYS – THIS NOVEL IS ADORKABLE!!!

We’re introduced to Barbara Jenkins, named after Barbara Gordon…aka…Batgirl (obviously). I was hooked already. I love me some Batgirl. Anywho…Barbara. She’s cool…well, I mean, I think she’s cool. Which means she’s really not all that cool. Because if I can related to her, it means she’s awkward and geeky, and tries her best to fit in but let’s face it, she’s a dork. (I will say, though, she owns her geekiness better than I ever did!)

The story is written in the style of Barb keeping a diary, and this is my only gripe with the novel. The diary entries were peppered with regular dialog – having been quite fond of keeping a diary, I know I NEVER wrote dialog within my journal entries. Not that I am the be-all, end-all diary-keeper, but I just mean it felt like trying to force a diary and novel into one. Which, I guess is the point, and what the author was actually trying to do. So, good job? Yes, good job.

The storyline was believable, and the characters were all relatable. Nothing too far-fetched happened, which made me happy. I listed “light romance/crush/infatuation” as a theme/genre – let me be clear that this is not a YA romance. This is simply a book about a young girl trying to get through school and she happens to have a crush on a guy. You’re not overcome with feels or eye-rolling over the cutesy mushiness…and it makes it an appropriate read for younger folks as well. Win!

Overall – I really enjoyed this novel, and I give it  (apparently I don’t know my own rating scale) 4 martinis. It was an easy read, it held my attention, and I really enjoyed the author’s style of writing and the subject matter. I think Barb and I would be pretty good friends, giggling over the boy who smells like ham and farts, and trying not to get caught staring at our crush’s tush. Because, butts.