Another feature at IGGPPC Summer Camp this year was a creative writing project called “Write a Letter to Your Nemesis” – the idea was to pair up with another Iggle and exchange letters written from the perspective of an infamous duo (Batman/Joker, Doctor Who/Dalek, Peter Pan/Hook, Alice/The Queen of Hearts…you get the idea!) I didn’t feel the strong urge to pair up with someone, so I decided to branch out on my own, and the next thing I knew, this little gem was penned. Er, typed.

The following is a Strongly Worded Letter from my favorite vampire, Lord Akeldama, to the entire population of unfashionable people and their undignified manner of dressing. I must encourage you to read it in a very…languid manner; and all the text in italics should be read a bit sing-songy, as one would do when bestowing a ridiculous term of endearment upon another. La, my darling dandelion puff!

I am putting pen to paper this evening to implore the scads of youths who lack the moral decency to be seen in public wearing such drab and hideous ensembles as seems to be fashionable in this age. My respectable drones inform me these nasty articles are meant to be comfortable and leisurely, however I can assure you, dear sweet gherkin,  that they are very much offensive to the eye.

Have you no manners? Is there no common decency to be regarded whilst socializing with one’s peers? Heavens me, what if Her Majesty were to spy you wearing such atrocities as “pajama pants” as one is partaking in tea? I say, where *has* the idea spawned that one must parade about in one’s bedclothes out of doors? These so-called pajama pants that seem to be *the thing* are most certainly NOT going to advance one’s status behind closed doors, should you take my meaning. That is to say, little lilac candy, how do the gentlemen succeed in wooing anyone when draped in such *repulsive* fabric? One owes it to oneself to be enrobed in nothing but the absolute best – silken fabrics, delicious fibers that caress the skin. Oh, I do believe I’ve come over all tingly. I must recline before something indecorous occurs, such as fainting or turning pink – such a shade would never match this cravat!

(This chap looks like he’d fit in well with Lord Akeldama’s drones!) 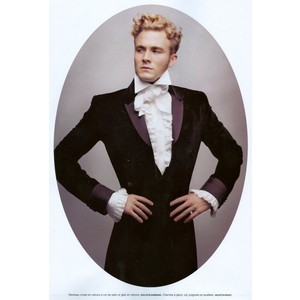